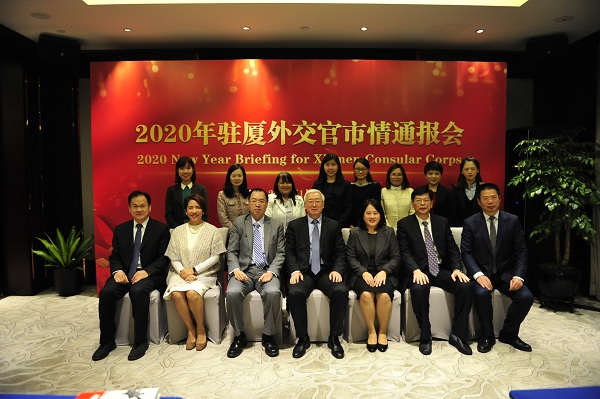 Xiamen in East China's Fujian province organizes a briefing regarding its developments in 2019 and plans in 2020 for diplomatic officers in the city on Jan 14. [Photo/fao.xm.gov.cn]

Xiamen in East China's Fujian province organized a briefing regarding its developments in 2019 and plans in 2020 for diplomatic officers in the city on Jan 14.

Han added that in 2020, the city will focus on the construction of a moderately prosperous society, foreign investment attraction, and high quality development.

He expressed hope that all the diplomatic officers from consulate generals of various countries in Xiamen would continue supporting the city's economic and social development.

The participating diplomatic officers spoke highly of the achievements made by China since its establishment over the past 70 years, as well as Xiamen's economic and social achievements.

The consul-general of Singapore in Xiamen expected to strengthen cooperation with the Chinese city in international arbitration, urban planning, and airport construction.

The acting consul-general of Thailand in Xiamen hoped to further cooperation with Xiamen in trade, tourism, and education by taking advantage of the 45th anniversary of the establishment of diplomatic relations between the two countries.

She expressed hope for more opportunities to enhance the cooperation between the Philippines and Xiamen in trade, culture, and tourism.