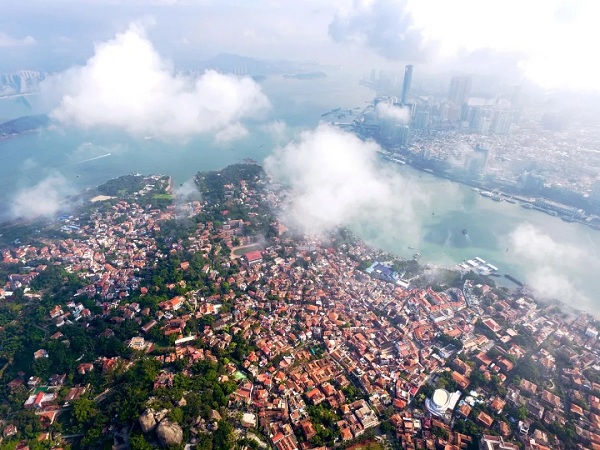 Gulangyu Island in Xiamen, Fujian province, is a UNESCO World Heritage site dubbed the "World Building Expo" and the "Island of Music".

However, few people know that it was also a revolutionary site of the Communist Party of China, due to its geographical characteristics.

On this beautiful island filled with vitality and an artistic atmosphere, there are several historical sites from the revolutionary period in the first half of the 20th century.

The second session of the Fujian provincial congress of the CPC was held from Feb 15 to 20, 1930 at No 449 Neicuo'ao Road, the private residence of a Chinese Indonesian.

It was a very important meeting in the history of the CPC's development in Fujian, with 22 Party members from across the province taking part. At the meeting, 10 decisions were made and the members of the CPC Fujian committee's leadership group were elected.

At No 8 Huxiang Lane stands a legendary two-story building with a floor area of less than 200 square meters. It served as the secret office of the CPC Fujian committee in the early 1930s.

It was the former site of Shenzhou Hospital, which served as a liaison office for the CPC Xiamen central committee from 1932 to late 1934.

A foreign-style building established in 1933 at No 197 Neicuo'ao Road was designated as the Xiamen committee office of the CPC's urban work department in 1948 because of its secluded location.

Several meetings of the Xiamen committee were held there, with many key decisions being made. Party members of the urban work department increased to more than 180 by the spring of 1949.

Turning left at the Piano Wharf and walking to the Pok Oi Hospital, you will see a three-story red-brick building, which is the former site of the Haibin Hotel built in the 1920s.

A ceremony for Japan's surrender was held there on Sept 28, 1945, with top Chinese naval officers in the Xiamen region in attendance.

Hero Hill is located in the southern part of Gulangyu Island and used to be named Qizaiwei Hill. Its current name is in memory of the more than 1,000 soldiers who died there during the fight to liberate Xiamen on Oct 15, 1949.