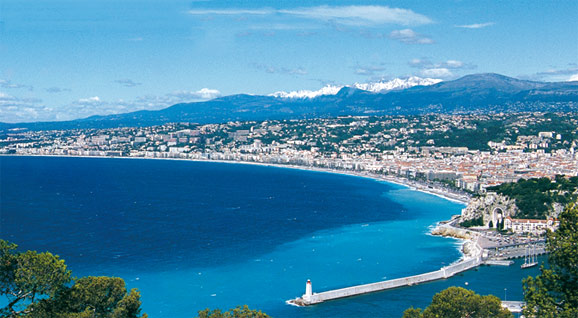 The French city of Nice established a sister-city relationship with China's Xiamen on May 22, 2014.

Located on the French Riviera between Marseilles, France, and Genoa in Italy, Nice is a major tourist destination. It covers an area of 7,192 hectares and has 300-hectares of green space. With a population of approximately 400,000, Nice is the fifth-largest city in France.

The city benefits from a pleasant Mediterranean climate all year round, resulting in hot, dry summers and mild winters with moderate rainfall. It is not uncommon for the city to record temperatures above 20°C in early spring.

Serving the city's air traffic is Nice-Cote d'Azur airport, the second-largest French international airport after Charles De Gaulle in Paris. Nice Villefrancheport is one of the top French cruise ports; it handles around 440,000 passengers every year.

It is also home to over 20 museums and art galleries, such as Musée Chagall, Musée Matisse and Musee Massena.

Much like Xiamen, Nice is the host city to numerous events, conferences and festivals every year. Over 2,000 festivals and events take place there every year, as organizers seek to benefit from the seamlessly never ending hours of sunshine in the city.The Nice carnival is one of the world's most famous carnivals. It attracts hundreds of thousands of tourists every year, helping to generate over 10 million euros for the city coffers.