Co-organized by the Chinese Athletics Association and the Xiamen Municipal People's Government, Xiamen Marathon is a unique international marathon held in spring on a route featuring coastal scenery. The event and the Beijing International Marathon have been recognized as the two leading marathons held in the south and north of China.

It is also called "Lantern Festival" or "Yuanxiao Festival", marking the birthday of the Ziwei Emperor (one of the four Gods of Taoism). For these few days, all streets are decorated with beautiful lanterns. In temples and other public places, there are festival activities such as dragon dancing, lion dancing, stilts walking, fireworks displays and lantern riddle guessing.

Time: 13th to 17th day of the first month in the Chinese lunar calendar 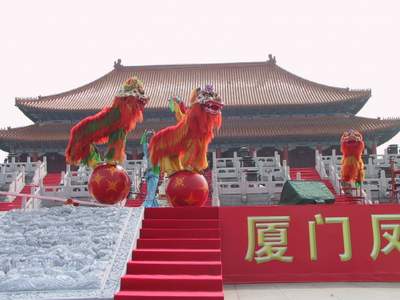 The festival, named after the Delonix regia, the city tree of Xiamen, is full of local cultural characteristics and vigor. A variety of activities are held, including the grand opening ceremony, a poem meeting, a beach party, an exotic fashion show and a seaside parade.

Time: When Delonix regia blossoms (generally in May and June). It is held alternately with the Ocean Culture Tourism Festival every two years.

During the Mid-Autumn Festival, people in Xiamen play a folk game related to the moon cake. When Zheng Chenggong and his army were stationed in Xiamen, the military officer Hong Xu designed this dice game to raise the soldiers' morale and help them not to miss their families. Later on, this custom spread in Xiamen, and today, in the evening of the Mid-Autumn Festival, every family plays the interesting dice game.

Time: 15th day of the eighth month in the Chinese lunar calendar

Time: During the National Day holidays. It is held alternately with the Fenghuanghua (Delonix regia) Tourism Festival every two years.