Xiamen enjoys a subtropical climate, which is warm and humid all year round, with an abundance of light, warmth and rain. Its temperature is neither severely cold in winter nor intensely hot in summer.

The city is surrounded by sea, islands, gulfs, beaches, and reefs scattered everywhere. On the islands stand rolling hills, strange stones, lakes and waterfalls. The temperate climate, rich in botanical resources and blooming flowers, make the islands exquisite to behold. It's these natural endowments that make Xiamen a well-deserved garden city.

Founded 600 years ago, the city boasts varied and colorful cultural landscapes, such as inscriptions from the Ming (1368-1644) and Qing (1644-1911) dynasties, ancient forts from the Qing Dynasty built to defend against invading countries, western-style buildings left by concession (leased territory), cultural relics relevant to Zheng Chenggong, a national hero of the Ming Dynasty and Tan Kah Kee, a well-known overseas Chinese, and colorful folk customs from Fujian province and Taiwan.

During the construction of the city's many parks, great attention has been paid to developing and promoting Xiamen's history and culture. In view of Xiamen's multicultural features, parks were built with various styles and distinctions. Xiamen has experienced western culture throughout its history, such as Gulangyu known as "World Expo of Architecture".

The favorable geographical location and climate have created very rich botanical resources, which is another advantage for Xiamen's gardening and afforestation. Big-flowered arbors, palm plants, colored-leaf plants, climbing plants and ground plants are extensively planted in gardens and greenbelts, such as parks, courtyards, and residential areas.

The mountains on Xiamen Island suitable for forestry have all been afforested. In 1996, the Xiamen municipal Party committee and government proposed a plan to build a green corridor along main roads of Xiamen and to afforest along the Huandao Road. 13 kilometers of coastal afforestation project of Round-the-Island Road have been completed. The afforestation of Xiamen is increasingly remarkable. While the economy rapidly develops, the urban environment hasn't been deteriorated and Xiamen has taken the lead among cities in China in recent years. 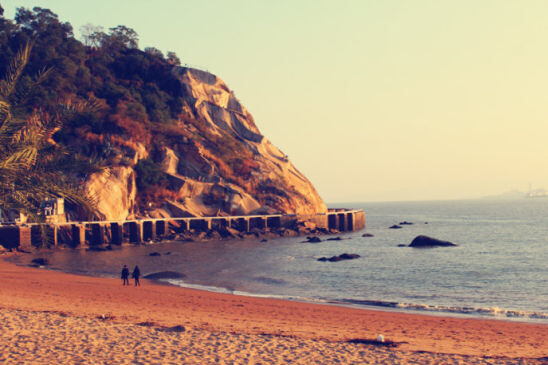 Gulangyu is tiny with an area of just 1.87 square kilometers. Its highest point Sunlight Rock is a symbol of Xiamen. Gulangyu, which means "drum wave island" in Chinese, takes its name from the drum-like sound caused by surging waves striking the reef on the southwest part of the island. It has a winding coastline with natural sandy beaches on all sides, as well as picturesque reefs.

Located in the south-central part of the island, Sunlight Rock is the island's highest point with an altitude of 92.7 meters. Though it may not rank with high mountain peaks, it appears superb and grand from afar. The name comes from a sun-shaped formation in the granite. When the sun rises, the morning light illuminates the granite in the Sunlight Temple and the rocks are bathed in the morning sun. 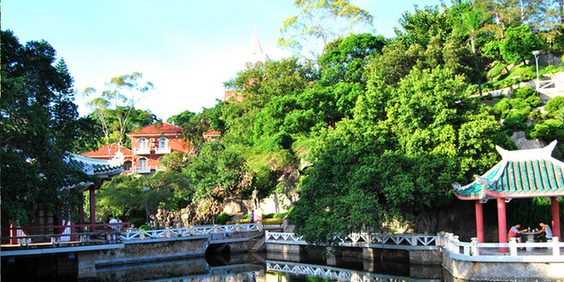 Shuzhuang Garden was once a private villa, and now is a famous public garden.

Built in 1931 on the south side of the island, Shuzhuang Garden became a garden open to the public in 1955. It is divided into two parts, the Garden of Hiding the Sea (Canghai Garden) and the Garden of Making-Up Hills (Bushan Garden). It was exquisitely designed to embody three important characteristics of gardening -- hiding elements, borrowing from surroundings, and combining movements.