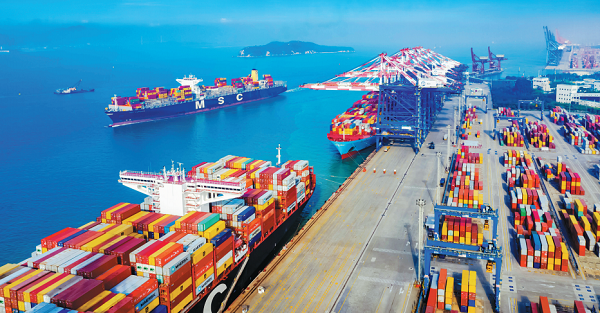 Containers await shipping at a port in Xiamen. [Photo by Wang Xieyun/China Daily]

Container throughput at Xiamen Port in Xiamen, East China's Fujian province exceeded 5.9 million twenty-foot equivalent units during the first six months of this year, up 11.43 percent compared with the same period in 2020, according to the city's port administration.

Statistics show that the throughput in June alone was a record high of more than 1.06 million TEUs.

From January to June, the port handled about 5,900 ships, including more than 200 container vessels of 200,000 tonnages and above.

Silk Road Shipping, an alliance jointly initiated in late 2018 by dozens of ports, carriers and logistics service providers in countries involved in the Belt and Road Initiative, made 1,118 voyages in Xiamen, carrying more than 1.24 million TEUs, up 25.27 percent year-on-year.

To meet the increasing demand of exports, the port also worked with international shipping companies to mobilize empty containers from around the globe to Xiamen.

The port has taken strict epidemic prevention and control measures and had no transmission cases during the period.