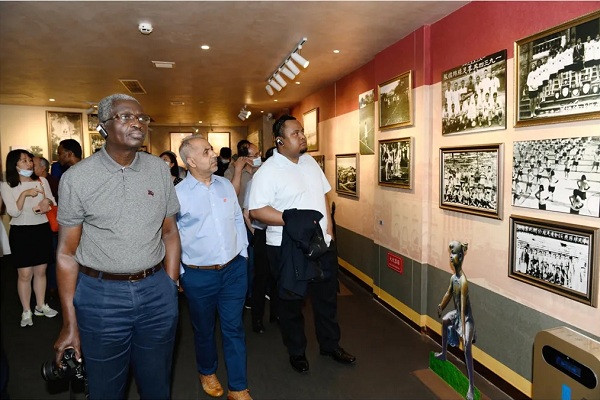 Diplomatic envoys from 22 countries visit a museum during their trip in Xiamen, Fujian province on July 13. [Photo/WeChat account: XIAMENFAO]

Diplomatic envoys from 22 countries witnessed the significant social and economic progress made in Xiamen, Fujian province on a tour that ran from July 13 to 14.

Throughout the trip, the diplomatic envoys learned about the great achievements made in the construction of the Xiamen Special Economic Zone over the past 40 years, as well as the city's successful development of an ecological civilization.

The envoys said that Xiamen is a microcosm of China's reform and opening up, which has brought tremendous benefits to its people, as well as provided valuable experiences and references for their countries. They expressed willingness to further promote practical cooperation with Xiamen in various fields.

Selim Belortaja, ambassador of Albania to China, was invited by the residents of Gulangyu Island to perform the world famous song La Paloma with them. He said that he was deeply impressed by the fusion of Western and Chinese cultures in the city.

Adama Compaore, ambassador of Burkina Faso to China, spoke glowingly about China's poverty alleviation success. He used the word "incredible" to express his admiration. He added that his country, which faces many ecological challenges, will get inspiration from Xiamen's experiences in handling related issues.

Sanmugan Subramaniam, minister of the Malaysian Embassy in China, said that Xiamen's cultural heritage is well protected and that the similar cultural customs in Xiamen and Malaysia will promote closer ties between the two sides.

Samoan Ambassador to China Tapusalaia Terry Toomata, who was also the head of the delegation, said that the envoys were impressed by the city's hospitality and are looking forward to strengthening exchanges and cooperation with Xiamen in the fields of trade, investment, tourism, as well as education.