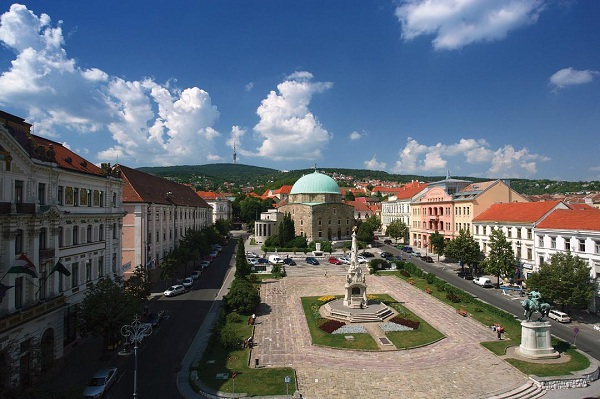 Pecs, the capital of Baranya, is the fifth largest city in Hungary. It is located 198 kilometers south of the capital Budapest and 30 km from the Croatian border. It is the economic, cultural and educational center of the region.

The city covers an area of 163 square km and has a population of about 160,000. It boasts beautiful natural scenery, afforded by the Mecsek Mountain on one side and the Danube on the other.

Pecs has a large amount of coal and uranium resources and a well-known porcelain factory that manufacturers Zsolnay Porcelain. The city's transformation from a traditional mining city to one with emerging processing and manufacturing industries started in 1970 and this has attracted a large number of foreign investors, including Finnish electronics manufacturing company Elcoteq and German electric utility company E-ON. The city's industrial structure has since been continuously improved.

At present, food sectors such as beer, champagne, bread and poultry processing have become pillar industries in Pecs. In addition, Zsolnay Porcelain, which has a history of more than 150 years, the power plant of Pannon Power and other tertiary industries have also injected vitality into the economic development of Pecs.

The cultural and educational industry in Pecs is also well-developed. There are 22,000 citizens, or 13.8 percent of the population, who have received university education.

The University of Pecs, the first university in Hungary, was founded in 1367. There are nearly 40,000 students in 10 departments including economics, medicine, engineering, music and art, as well as adult education. The university has scientific research partnership ties with more than 50 countries.

Pecs was selected as the European Capital of Culture in 2010, along with Essen in Germany and Istanbul in Turkey. Its motto is "a city without borders". The Christian cemetery in Pecs is a world cultural heritage site.